Some people might think that driving under the influence or DUI is not a serious offense, but it is, judging by the penalties that offenders face upon conviction.

On top of jail time, a DUI offender in Florida or any other state will likely pay steep fines and go for a long time without a valid driving license, among other things.

Some judges would also order people convicted of a DUI to get an ignition interlock installation done on their car to prevent them from driving intoxicated again.

For DUI offenders who are American citizens, the consequences mentioned above can already prove to be harsh ones.

Can you imagine what it would be like for non-citizens—U.S. immigrants—to be arrested, tried, and convicted of a DUI?

While they would still be facing the usual consequences of a DUI, U.S. immigrants may also end up jeopardizing their immigration status if they ever become DUI offenders.

Let’s take a look at some of the possible consequences of a DUI for U.S. immigrants.

Deportation is every U.S. immigrant’s worst nightmare, and it’s always a possibility for non-U.S. citizens facing a DUI conviction. 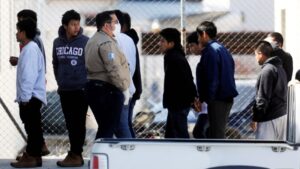 After all, a DUI is a criminal offense. Depending on the severity of the case, a DUI could be construed as a “crime of moral turpitude,” for which an immigrant could be deported, in keeping with the Immigration and Nationality Act or I.N.A.

A single, first-time conviction for a simple DUI doesn’t qualify as a crime of moral turpitude. What does is a DUI with aggravating factors, which could range from driving on a suspended or revoked license to seriously hurting or causing the death of someone at the time of arrest for DUI.

Having multiple DUIs could also be deemed sufficient by immigration authorities to order the non-U.S. citizen’s deportation.

Green card holders or non-U.S. citizens with lawful permanent resident (LPR) status enjoy more benefits than most other immigrants. Travel in and out of the United States goes much more smoothly, and they can even sponsor immediate family members to stay in the U.S. with them.

However, a DUI conviction will still cause a green card holder problems, particularly when the time to apply for U.S. citizenship arrives.

Assuming that their DUI does not qualify as a crime of moral turpitude, a green card holder can stay, but being a convicted DUI offender does not exactly equate to being a person of “good moral character,” a primary requirement for naturalization.

The U.S. Citizenship and Immigration Services (USCIS) officer handling your application could ask probing questions about your DUI arrest, any drinking problems you might have, or if someone got hurt when you committed your DUI. That same officer could also deny your application if they deem you as not having good moral character.

Then again, you still stand a chance to present your case while applying for U.S. citizenship.

For example, you can show the USCIS officer that—except for that one simple DUI—you are generally an upstanding citizen and a productive member of society.

Show proof that you do charity work, that you’re an active member of your community, and that you’re a model employee and a good family person.

The USCIS officer could take those as a sign that you’re a person with good moral character, which raises your chances of being granted U.S. citizenship.

The State Department has already revoked over the years the immigrant visas of many DUI offenders. Some have been required to re-apply for a new visa, while some have been deported straight away.

If you were fortunate enough to leave the United States with your visa still valid, re-entering the country would be a different story.

Immigration officers will likely find out that you have a criminal record and will probably subject you to more intense scrutiny before being allowed to enter, if you’re lucky. If you’re not, you could be simply barred from entering the United States, especially if your DUI conviction falls under crimes of moral turpitude.

For those covered under the U.S. immigration Deferred Action for Childhood Arrivals or DACA, a DUI could spell trouble for them.

Qualified youths holding a DACA status could end up losing that discretionary privilege if a court finds them guilty of driving under the influence or any criminal offense. Without their DACA status, they will likely face deportation.

If you’re a U.S. immigrant facing an uncertain future in the country after a DUI, it would be best to work with a skilled and experienced immigration attorney who can help you get the best possible outcome amid all the trouble caused by a DUI conviction.