Drunk on Carbs: Why a DUI for a Woman with Auto-Brewery Syndrome Shows You What Kind of DUI Defense Lawyer You Need

Home » Blog » DUI Defense » Drunk on Carbs: Why a DUI for a Woman with Auto-Brewery Syndrome Shows You What Kind of DUI Defense Lawyer You Need

It’s not often that the dismissal of a drunk driving charge becomes national news. But that’s exactly what happened last month. As unusual as this New York case is, it actually offers a critical lesson for anyone arrested of drunk driving or DUI in Miami, Fort Lauderdale, West Palm Beach, or Key West.

Back in 2014, police in western New York pulled over a driver who was weaving all over the road. When they measured her blood alcohol level, she came in at a staggering .33 percent BAC. The legal limit which determines whether one is legally impaired in Florida and in all fifty states is .08% BAC. You might think that, if you were pulled over for DUI and blew more than four times the legal limit, there’s no way to fight the charge.

Yet the driver hired a DUI lawyer to defend her against the drunk driving charge. He investigated, hired an expert, and persuaded the judge to dismiss the driver’s case because she has a condition called auto-brewery syndrome (or gut fermentation syndrome). In doing so, the DUI attorney worked hard to “prove her body works as a brewery, using excess intestinal yeast to turn ordinary food into alcohol, resulting in breathalyzer readouts that generally would indicate life-threatening intoxication.” This is considered a novel defense in the DUI defense world and it was carefully crafted by the DUI and criminal defense lawyer.

Ask any experienced, knowledgeable DUI defense lawyer in Miami, and he’ll tell you that getting your DUI case Dismissed is an outstanding result for a driver whose breath alcohol measurement was higher than four times the legal limit.

So what? This is a New York case about a rare condition. So rare that a BBC article about the condition suggests there might be only 50 to 100 people with this “very rare” syndrome in the country. One that might be the kind of condition that could prompt the Florida Department of Highway Safety and Motor Vehicles to reexamine you under Florida Statute Section 322.221 or impose restrictions on your driver’s license under Section 322.16.

So what does it have to do with someone charged with drunk driving in Miami-Dade County, Broward County, Palm Beach County, or Monroe County?

This DUI case highlights exactly why, if you’ve been arrested, you absolutely must hire a knowledgeable and aggressive DUI defense attorney who is completely on your side and willing to fight your case. Some lawyers might have figured that defending the New York driver was a lost cause. Some might have treated her like just another number, not spending as much time and attention on her challenging case.

Many may have rushed to negotiate a plea bargain where she would have had to plead no contest and be found guilty, leaving her with a DUI record for the rest of her life. Many times that is the type result garnered by the cheap fee high volume mills that have sprung up all over the country or of an overworked public defender’s office – so be forewarned. In this specialized area of law, like in most other things in life – you get what you pay for.

This being said, the DUI defense attorney you deserve will be aggressive, thorough, and creative. You already know how important it is to put a good criminal defense DUI lawyer on your case as soon as possible if you’ve read my “4 Things You Must Remember If You’ve Been Arrested for DUI in Miami” on DUIfirm.com. That’s the best way to ensure he the DUI lawyer enough time to investigate and prepare the many potential defenses to your DUI charge. 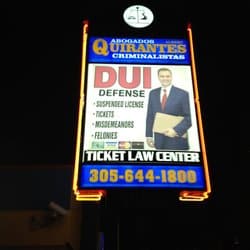 The auto-brewery case is a good reminder that you want the right DUI defense lawyer representing you. And you need to ask several important questions before hiring an attorney to make sure your attorney has the right attitude. For the best chance, you want the lawyer defending you to believe that almost any case can be won.

Remember, more experience could help make a difference in a tough case, which is why many drivers want a lawyer who has defended more than 8,000 clients in almost 30 years of practicing law, such as what we offer at www.DUIfirm.com. If someone you know has been arrested for DUI or drunk driving, he or she needs  aggressive, experienced help right away for the best odds of enjoying a dismissal – just like that driver with auto-brewery syndrome.

Increase your knowledge! If you want to know more about how to resolve the problems you face when charged with a DUI, a criminal offense, or traffic ticket in Florida, then you can follow Miami Attorney Albert M. Quirantes – Ticket Law Center, A Criminal & DUI Defense Law Firm on Facebook, Twitter, or Google+.